7 Top-Rated Natural Wonders In The Seychelles

Tropical island fantasies feature the Seychelles, which are unspoiled and stunning. 115 coral and granite islands that rise from a vast underwater plateau are home to many attractions, such as UNESCO nature reserves, jungles, boulder-strewn beaches, and coral reefs.

Where Is Seychelles Located?

In the equatorial region, Seychelles is east of Kenya. A significant portion of the islands and atolls within the archipelago is protected. There are lots of things to do in Seychelles, from hiking the mountain trails to basking on the ravishing beaches to rock climbing, photographing the unique flora and fauna, to dining on mouthwatering Creole food.

Things To Do In Seychelles

There are many luxurious five-star Seychelles resorts in the larger granitic inner islands of the Seychelles (primarily Mahé, Praslin, and La Digue). Mauhe is home to the small capital, Victoria, as well as the international airport, the cruise ship port, and the gorgeous Morne Seychellois National Park.

While Praslin Island offers visitors a glimpse of the Vallée de Mai, La Digue offers some of the Seychelles’ most stunning beaches. Small coralline islands and atolls comprise the outer islands, mainly uninhabited sand cays and coralline islands. Fishing is excellent on Alphonse Island and Farquhar Atoll, where there are exclusive fishing lodges. Our list of natural wonders in the Seychelles will help you decide what to do in these sublime islands. 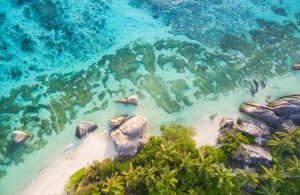 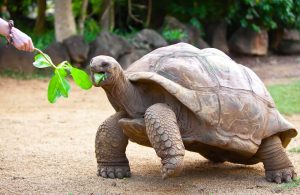 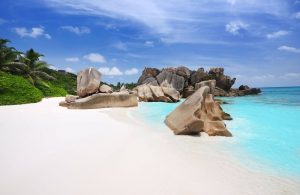 Top-Rated Natural Wonders In The Seychelles

This small crescent beach on Mahé’s south coast is one of the best beaches on the island. It is a popular surfing spot due to its frequent big swells and wild waves. When trade winds blow from the southeast, swimming can become rough due to the lack of a protective reef, but sunbathers, beachcombers, and photographers will enjoy this picturesque, palm-framed strand year-round. There are turtle nests on these powdery shorelines.

Chevalier Bay (Anse Lazio) is a beautiful beach on the north shore of Praslin Island. Access to the beach requires a hike over a hill, but it’s well worth it.

Soft blond sand meets crystal-clear waters of dreamy blues along this long stretch of sand bordered by granite boulders. Beachgoers can relax in patches of shade provided by Tamamaka trees and coconut palms, and hungry bathers can refuel at restaurants on either end of the beach.

Anse Lazio is best visited in the early morning or late afternoon when most tour buses have left.

Located 15- to 20-minutes by boat off the coast of Mahé near Victoria, Ste Anne National Marine Park was the first national park in the Indian Ocean when it was created in 1973.

Snorkeling, scuba diving, and glass-bottom boat excursions reveal the park’s thriving coral reefs, and day trips offer the opportunity to explore most of the island within the reserve. A few of the islands also allow overnight stays.

Hawksbill turtles nest on Saint Anne Island, one of the most important nesting sites in the world. Despite its mangroves and crocodiles, the island was the site of the first French settlement in the Seychelles in 1770.

Visit JA Enchanted Island Resort, a former leper colony, to go for a nature walk and spend the night. Nature reserves and breeding sites for noddies make up Île Cachée. Cerf Island’s beautiful reefs and uncrowded beaches offer the perfect setting for swimming, snorkeling, and diving. In addition to the Cerf Island Resort, you can also stay at the L’Habitation Hotel.

Lazare Picault, who explored the islands for the French government in the 18th century, is credited with creating the charming Baie Lazare village on Mahé.

This region is known for its Neo-Gothic Baie Lazare Church, which stands in homage to St. Francis of Assisi and offers sweeping views of the surrounding area. There are several stunning beaches on the Seychelles, including Anse Soleil and Petite Anse, which offer dazzling white sand and striking blue waters.

The Rust island of Curieuse was once called Île Rouge because of its red-colored earth. Now, the island is home to a giant tortoise breeding program that roams freely around its sandy coves.

Curieuse’s white-sand beaches are shaded by takamaka and casuarina trees, but the island has another distinct characteristic: it is the only place outside of Praslin where the coco de mer palm can be found.

In addition to the remains of the leprosarium, you can see the doctor’s house, a national monument that is preserved on the south shore. The island of Curieuse can be reached by boat tours departing from Praslin Island.

A haven for nature lovers, La Digue is the island with the fourth-largest land area in the archipelago. It’s also a great place to see traditional island life – oxcarts and bicycles are popular modes of transport.

The region’s coastline (Anse Source D’Argent) is dotted with beaches and granite cliffs, and beach lovers can enjoy one of the most scenic stretches of sand and ocean on the planet. In L’Union Estate, near the old vanilla plantation and copra factory, you must pay to access the beach.

Among the leading sightseeing attractions in Veuve is the endangered black paradise flycatcher, also called “The Widow” for its stream of black feathers. The La Pass to Grand Anse Trail offers hikers an opportunity to enjoy French colonial houses as well as forest and marshes, leading up to the gorgeous Grand Anse beach.

Victoria is overlooked by Mount Seychellois, which is 905 meters high. Birds such as the Seychelles scops-owl, bulbul, and sunbird inhabit the area, and the lush vegetation ranges from several species of endemic palm trees to pandanus, pitcher plants, and ferns.

The island has some of the best hiking trails. Stunning views of the southwest coast of Mahé can be seen from the steep slopes of the mountains along the trails as they ascend from the village of Danzil to the park. The moderate Morne Blanc hike offers spectacular views from its summit and is one of the most popular trails.

Hikers can reach the Baie Ternay and Port Launay Marine Parks by walking west through the park. There is an isolated beach at Anse Major and a hamlet named Bel Ombre to the northwest of the city.

Top 10 Most Spectacular Hotel Views in the World

5 Future Predictions for a Post-Coronavirus World