Occupying a 1930s building that originally was Berlin’s Royal Danish Embassy, Das Stue Hotel – Berlin, Germany‘s unique heritage is reflected in its name, the Danish term for “living room.” The hotel incorporates the prominence of its classicist facade and the natural beauty of its leafy Tiergarten address, formerly the city’s royal hunting grounds. The owners have created a sophisticated urban retreat with personalized comforts – much like the living room of someone who is well connected in Berlin and has immediate access to the city’s countless attractions.

The grand lobby features eye-popping artworks and a gorgeous restored staircase, and leads through to the hotel’s lounge, bar, restaurants and garden terrace.

Patricia Urquiola, the acclaimed Spanish architect and designer, brings her signature sleek and elegant touch to the hotel’s interiors, which range from the funky mix of colourful sofas and animal sculptures in the lounge to the more neutral, distinguished tones of the Casual Restaurant, and a cosy outdoor dining terrace that rather cutely abuts the Ostrich enclosure of the neighbouring Zoo. 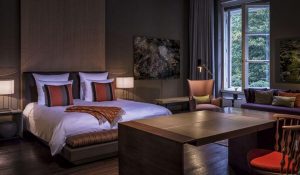 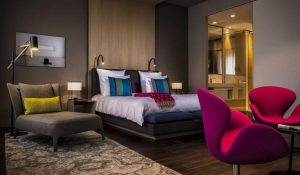 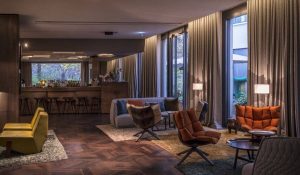 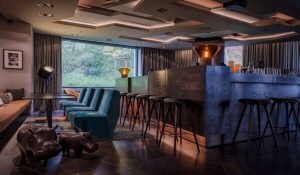 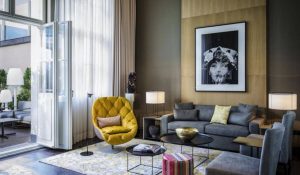 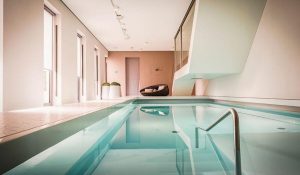 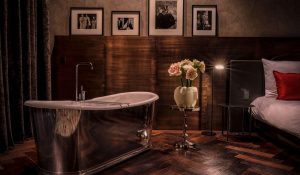 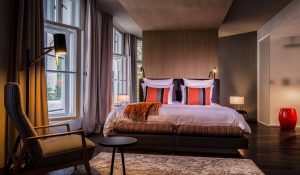 Most of the 78 guestrooms at this grand boutique hotel in Berlin have views of either the animals in the neighboring Berlin Zoo or the leafy Tiergarten. Thanks to its former life as the Danish embassy, the rooms and suites in the old part of this hotel benefit from the high ceilings and generous space. The large rooms in the hotel’s new building are equally charming thanks to floor-to-ceiling views of the zoo and their elegant design. Fourteen rooms feature terraces and balconies. Das Stue has also incorporated eco-friendly heating amenities, furthering the hotel’s concept of bringing together the historic, the modern, and the contemporary in a remarkable and replenishing symbiosis.

READ RELATED POST  Fashion Weeks Around the World: What to Expect

Relax, let go, and enjoy: Rituals of nurturing and pampering are combined with the ancient knowledge of traditional Chinese medicine to create a holistic entity in the Susanne Kaufmann™ Boutique SPA. Wholesome products are used, containing no chemical additives or colourants. Facial and body treatments are centred on anti-aging and active regeneration – awakening new life energies and bringing vitality into the daily routine.

Paco Perez’s celebrated Cinco restaurant is an impressive match of warm contemporary design and high end food. Having already earned four Michelin stars with his two restaurants in Spain, his Meditteranean flair has earned him one more here. Perez offers a more modest (but still delicious) menu in the The Casual Restaurant, which also doubles as the breakfast room, and his influence can even be felt in some of the classic 1920s and 1930s cocktails served up in the bar.

When staying at Das Stue, you’ll benefit from the exclusive access to the adjacent Berlin Zoo through the bar’s terrace. The spectacular views of the zoo’s antelope and ostrich enclosure are no longer just a feast for the eyes. Guests can enjoy a seamless ‘urban safari-like’ experience in the very heart of the city without having to queue at the official entrance, thereby saving precious holiday time.

With its private zoo access, Das Stue family has taken over the sponsorship of the newborn red giant kangaroo that was born on March 2, 2016. The little girl called “Stuy” welcomes you when stepping into the zoo and if you are lucky hops along with you upon your first steps.

The Potsdam-based firm Axthelm Architekten added a new wing on the building’s former back courtyard, which is clad in a floral-patterned concrete surface acting as an elegant counterbalance to the rough dressed stone of the main building.

READ RELATED POST  CoolRooms Atocha in Madrid, Spain – The Luxury of Being Cool

Quality, heritage, and contemporary design converge at Das Stue. Star designer Patricia Urquiola oversaw the artistic direction of the property’s public spaces, creating a striking yet cozy mélange of places where guests can lounge, including the muted couches and chairs in shades of yellow, rust, and grey in the hotel’s library.

Based on Urquiola’s concept, LVG Arquitectura S.L.P. outfitted the hotel’s 78 guestrooms in subdued modern decor that emphasizes polished surfaces and rich fabrics. The rooms are designed to recall the open spaces of villa environments, complemented by high ceilings, hardwood floors and views of the adjacent Tiergarten.