Wonderfully tranquil and restful, Hayfield Manor – Cork, Ireland stands in two acres of mature gardens close to the city centre. The ultimate urban retreat, the hotel has a gourmet restaurant, a bistro and a six-treatment room spa.

Set at the end of a tree-lined path, the hotel is as pretty as a picture with the look and feel of a period manor house. Rooms and suites are well proportioned, decorated in tasteful muted colours with beautiful antique furnishings and exquisite fabrics.

Sink into a comfy leather Chesterfield in the library, next to a roaring fire or opt for an indulgent afternoon tea in the bright and airy drawing room.

A ten-minute stroll takes into the vibrant centre of Cork with its smart boutiques and lively arts and music culture. There are two highly reputable golf courses close to Hayfield Manor Hotel or try a spot of river or sea fishing.

Despite a new build just 20 years ago, the Scully family owners haved retained a period-property feel to Hayfield Manor. The commanding double-wing oak staircase replicates the one from the first house design, while the lobby marble fireplace is original. Georgian-style windows, antiques and plasterwork details throughout the hotel add to the estate house atmosphere. Thick carpets and rich furnishings in gold and beige with navy and brown accents set a luxurious tone, supported by attentive, yet unobtrusive staff. A pretty, walled garden, inspired by Muckross House gardens in Killarney, can be accessed via the residents’ library/lounge, Orchids restaurant or pool area. The grounds and trees, some dating more than 150 years, have been carefully retained. 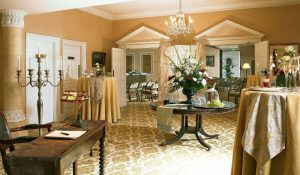 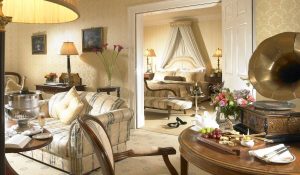 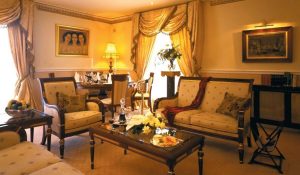 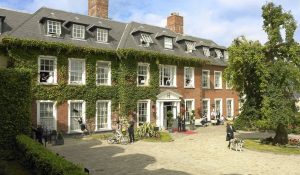 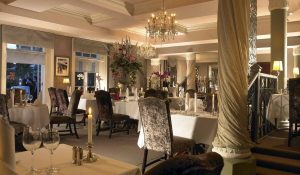 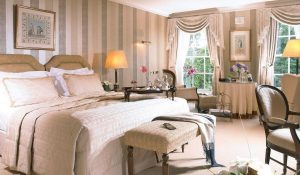 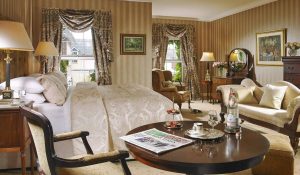 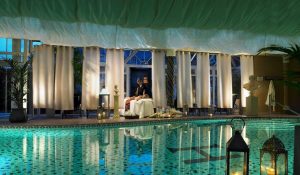 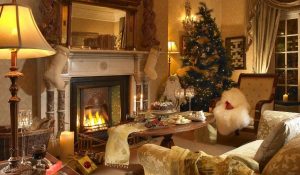 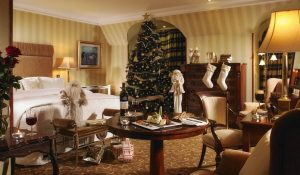 Each of the hotel’s 88 bedrooms is uniquely decorated and has a distinctive touch. All feature air-conditioning as well as individually controlled heating, tea/coffee facilities, a free-standing ironing board and iron, a 32” flat-screen television, notebook-sized safe and Elemis toiletries. Standard rooms are a generous 300 sqft and decorated in soothing gold tones with white linens. Deluxe rooms have a garden view and Nespresso machines. A Master Suite overlooking Cork city features a working fireplace, whirlpool bath and large lounge area. Many rooms can be interconnected for groups – a popular option with extended families.

Hayfield Manor has two primary restaurants. Perrotts has a casual atmosphere in a bright conservatory, open for both lunch and dinner. Popular with residents and Corkonians alike, the menu has a wide range of modern Irish-style options based on locally sourced ingredients. Beetroot-cured salmon, chicken confit and black pudding salad mix with more traditional dishes such as fish and chips or homemade beef burgers.

The hotel’s premier restaurant is Orchids, which has garden views. Producers are listed on the menu and Executive Chef Mark Staples focuses on seasonal and sustainable ingredients. The menu is also modern Irish, with an upmarket slant: typical main choices might include seared monkfish marinated in black pearl curry with white onion risotto, beef filet with beef cheek, and chargrilled aubergine with beetroot, puy lentils and Toonsbridge mozzarella. Junior gourmands are offered their own menu.

Afternoon Tea at the Hayfield is extremely popular with guests and locals. A variety of specialty teas and coffees are on offer, as well as prosecco or mulled wine to accompany sandwiches, pastries and tea breads. The Manor Bar also serves food throughout the day such as sandwiches, salads, pastries and desserts. Breakfast for residents is extensive with a broad range of hot and cold options, including a quinoa salad.

Ireland’s second city is first in every important respect – at least according to the locals, who cheerfully refer to it as the ‘real capital of Ireland’. It’s a liberal, youthful and cosmopolitan place that was badly hit by economic recession but is now busily reinventing itself with spruced-up streets, revitalised stretches of waterfront, and – seemingly – an artisan coffee bar on every corner. There’s a bit of a hipster scene, but the best of the city is still happily traditional – snug pubs with live-music sessions, restaurants dishing up top-quality local produce, and a genuinely proud welcome from the locals.

The compact city centre is set on an island in the River Lee, surrounded by waterways and packed with grand Georgian avenues, cramped 17th-century alleys, modern masterpieces such as the opera house, and narrow streets crammed with pubs, shops, cafes and restaurants, fed by arguably the best foodie scene in the country.