Located in the well-heeled residential area of Jardins in São Paulo, Hotel Unique is sculptural architecture at its most original—and a must for savvy architecture fans and well-traveled urbanites alike.

The spacey, green-weathered copper that adorns the facade stretches across the building’s unusual shape, a massive inverted arch with circular windows like over-sized portholes. In the guestrooms, where there are no right angles, unusual accessories from around the globe add to the ultra-cool feel, which is accented by the staff’s coolly impeccable service. Upstairs, what is perhaps São Paulo’s finest rooftop terrace offers amazing views of the city: that is, if guests can take their eyes off the fascinating crimson swimming pool that runs along its edge.

Hotel Unique is a living, breathing part of the city of São Paulo, a place where architecture, art, design, fashion, gastronomy, music and exquisite service are at the heart of a groundbreaking hotel culture that delights and inspires each of our guests. 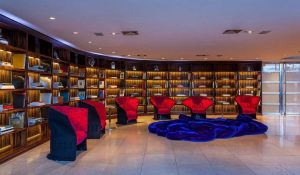 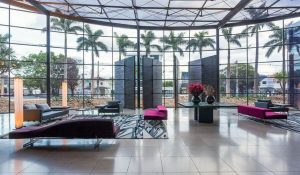 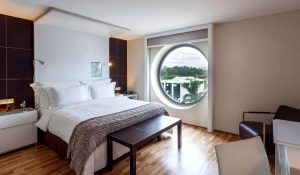 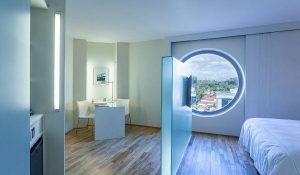 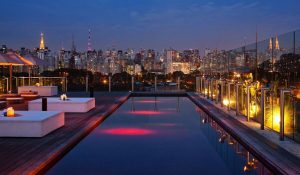 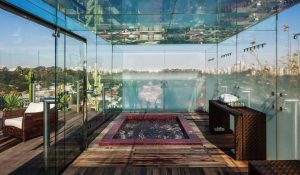 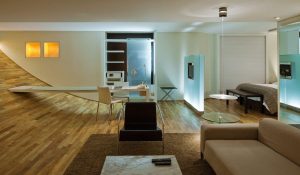 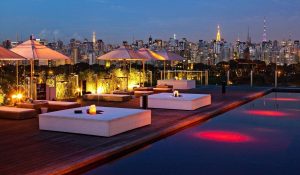 Dramatic 80-foot-high interior hollows and corridors define the curved design of Hotel Unique—and this theme continues inside the rooms, where one finds no right angles at all.

A massive bed stitched from dozens of velvet tubes shimmers in purple, dark blue, and green and is placed directly in the middle of the rooms, assuring guests that the hotel stays true to its name in the private areas as well. The 94 rooms and suites, a blend of hi-tech details and natural elements, are a study in ultra-cool modernism. Havaianas slippers in each room—a popular Brazilian accessory—help guests kick back.

Located on the rooftop of the hotel, Skye boasts a crimson red pool with an underwater sound system and lounge area with stunning views over Ibirapuera Park and the entire São Paulo skyline. At Skye, innovative, delicious food and drink by Chef Emmanuel Bassoleil, visual exuberance, and legendary Unique service engage all the senses.

The Wall bar, located in the lobby of Hotel Unique, is a spacious yet welcoming living room, designed to set the perfect scene for small, casual meetings or for our guests to simply relax while appreciating the variety of drinks and snacks available.

The remarkable 60-foot vertical Wall bar is adjacent to a library with over 300 titles including works on design, architecture, art and photography and a cyber café with 24-hour internet access for hotel guests.

READ RELATED POST  Where To Live In Paris: The Most Exclusive Neighbourhoods

São Paulo is a monster. Enormous, intimidating and, at first glance at least, no great beauty. It’s a difficult city for the traveler to master and one that may not seem worth the sweat. Even the most partisan Paulistano – resident of São Paulo city – will rail about the smog, the traffic, the crumbling sidewalks and the gaping divide between poor and rich.

But in the same breath they’ll tell you they’d never live anywhere else. Let them guide you to their favorite haunts and the reason for this will begin to unfold. Maybe they will introduce you to the city’s innumerable art-house cinemas and experimental theaters. If they’re gourmands, you’ll focus on the smart bistros and gourmet restaurants that make the city a world-renowned foodie haven. If they’re scenesters, double up on espresso before embarking on a tour of raucous underground bars and the 24/7 clubbing scene. Whatever pleasures you might covet, Sampa – as the city is known – probably has them in spades.

This fertile cultural life is supported by Brazil’s biggest and best-educated middle class and further enriched by literally hundreds of distinct ethnic groups – including the largest community of people of Japanese descent outside Japan, the largest population of Italian descendants outside Italy and a significant Arab community fueled mostly by Lebanese and Syrian immigration. There are one million people of German stock, as well, sizable Chinese, Armenian, Lithuanian, Greek, Korean, Polish and Hungarian communities; and, most recently, growing numbers of Peruvians, Bolivians, Haitians and Africans. São Paulo also has the largest openly gay community in Latin America.

An estimated 20 million people live in greater São Paulo, making it the third-largest metropolis on earth. Besides a dizzying avalanche of first-rate museums, cultural centers, experimental theaters and cinemas, Sampa’s nightclubs and bars are among the best on the continent (15,000 bars make for one hell of a pub crawl) and its restaurants are among the world’s best. Its relentless, round-the-clock pulse – a close cousin of New York or Tokyo – can prove taxing even for the fiercest hipster. Then again, it may just deliver the charge you need to discover one of the world’s great cities.