Did you know that it is fully possible to find luxury train travel in the US? In your mind, a grand vintage train ride is probably something along the lines of a luxurious train route outside the US that makes stops at numerous ornate and beautiful train stations along the way. It’s understandable, as many countries around the world have a much stronger railroad tradition than the US.

It may not be as efficient or as accessible as Europe, but in terms of luxury, you’re not bound by the continent. With the train tour companies across the country, there are many epic train journeys in the US, ranging from traversing the wilds of Alaska aboard the Denali Star to exploring the rugged West on the Colorado & Southern Railroad. Train trips in the US might not be cheap, but they’re worth the splurge. This post will explore the 7 best luxury train travel throughout the US. 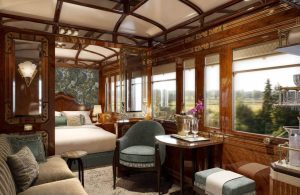 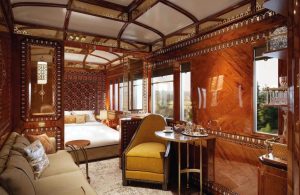 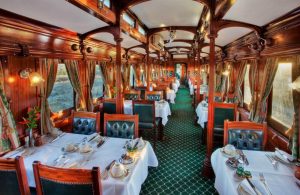 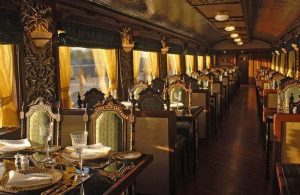 The Best Luxury Train Travel In The US

Kicking off the list is a train ride through the great lands of Alaska. One of the most remote US train trips you can take is the nine-day Alaska the Greatland tour aboard Denali Star and Glacier Discovery. As you travel from Fairbanks to Denali National Park, you pass through Kenai Fjords National Park on the way back.

In addition to wildlife in Denali, you’ll see small villages in Talkeetna and even take a dogsledding tour. You can also cruise glaciers through some of Wyoming’s most beautiful scenery or take a riverboat ride through the Chena and Tanana rivers.

As one of the highlights of the trip, the Denali Star will take you along the historic Alaska Railroad through rugged mountains and forests. Views of Mt. Denali – North America’s tallest mountain – are included. The average price per person is $3,995

With an upgrade, you can sleep in a private room on the deluxe motorcoach. You’ll see National Park, cross the Continental Divide on the Going-to-the-Sun Road, see the mesas and buttes along the Colorado River, see bison, elk, moose in Grand Teton. The average cost per person is $4,620

Traveling through Tennessee and North Carolina’s Great Smoky Mountains means stopping in some of the most historically significant, soulful, and vibrant cities, as well as exploring the breathtaking scenery.

Starting in Nashville, you’ll then travel to Chattanooga and Pigeon Forge, before entering the wilderness in several steam locomotives. Among the rides available are the Summerville Steam Special of the Tennessee Valley Railroad, the Incline Railway to Lookout Mountain, and the Tuckasegee Steam Train of the Great Smoky Mountains Railroad.

After passing through the Great Smoky Mountains National Park, these trains end their trip in Asheville, North Carolina. Asheville offers many opportunities to explore Beaux-Arts architecture, Neoclassical structure, and Gothic architecture, including the historic Biltmore Estate, as well as many art galleries. The average cost per person is $2,795

Next, is the New England’s Autumn. You won’t find a better train ride through New England anywhere else in the country than this eight-day trip. Since it is undoubtedly better than any itinerary you could design, you should not attempt to design your leaf-peeping itinerary. After departing from Boston, passengers travel along the Conway Scenic Railroad to North Conway.

The Cog Railway on Mt. Washington follows in the next segment, leading into Amtrak’s Vermonter service on the Burlington to Brattleboro route. On every leg of the journey, guests will see some of the most striking leafy hues they have ever seen. Besides leaves, you’ll also discover Mystic Seaport, Boston’s historic Freedom Trail, and the Newport Mansion. The average price per person is $2,495

This train route will let you experience California’s redwood forests and wineries on the same journey. The journey takes place on three different railways over eight days.

Perhaps the most exciting part of the trip has been the final leg. Here you get to experience the best of both worlds enjoying delicious wine and scenic views. This route travels through the vineyards of Sonoma, Napa, and Healdsburg. The average price per person is $3,495

Exploring the American West is a long-held tradition. However, today you don’t have to use a clunky car or a covered wagon. A six-rail excursion through the Rocky Mountains is part of the Colorado Rail Experience. The featured railroads are the:

READ RELATED POST  Quick Facts to Know about Tucson, Arizona Before You Visit

Onboard you will hear about the state’s mining and railway history as you plunge deep into the Old West. From Denver, the trip also includes visits to Breckenridge, the Garden of the Gods, and historic downtown Durango. The average cost is $2,695 per person.

7. Grand Canyon and the Southwest

You will then cruise Lake Powell on a boat, see Antelope Canyon and take a jet boat ride along the Colorado River for views of Utah’s red rock cliffs. It’s a five-park trip that includes the Grand Canyon, Zion, Bryce Canyon, Capitol Reef, and Arches.

By the end of the journey, you will feel as though you have thoroughly explored the Southwest’s most breathtaking geographical features. The average cost is $3,395 per person.

Top 10 Luxury Experiences in the Mediterranean