Chefchaouen is a small town in Morocco with a rich history. Nestled in the Rif mountains, this old town is known for its beautiful surroundings and architecture, but what makes it stand out are the striking and varying shades of blue walls. While tourism has definitely taken hold, the balance between ease and authenticity is just right.

Chefchaouen has plenty to offer fitness fanatics and those looking for adventure. Valleys, gorges and picturesque peaks are in abundance where arid landscapes meet trickling mountain streams. 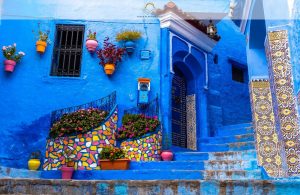 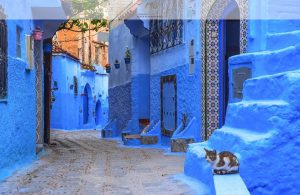 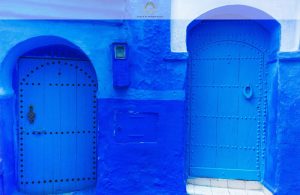 But why is Chefchaouen entirely blue?

The color blue is representative of the sky according to Jewish belief. Jewish communities, therefore paint things blue and use blue-colored fabrics, especially prayer mats.

People believe that the Jewish refugees spread the blue fever to the entire “Medina” in 1930. The practice of painting walls blue was introduced by the Jews to stick to their religious practices. However, older residents say that the majority of the buildings within the medina used to be white until fairly recently. They stress that only the Jewish part of the medina used to be painted blue.

READ RELATED POST  Unlock the Many Natural Wonders of Zambia

The residents believe that the blue shades repel mosquitoes. Their reasoning is that the insects do not like being in the water, although they live near the water. The blue walls almost look like flowing water, and they believe that this aspect keeps away the mosquitoes.

A group of residents says that the shades of blue keep their houses cool in warmer months.

According to a few locals, Chefchaouen’s walls are bathed in multiple shades of blue reminiscent of the striking blue of the Mediterranean Sea. Others believe that the blues represent the Ras el-Maa Waterfall. The citizens of the town get their drinking water from this waterfall.

The locals believe that the painting was done to always remind them that life-sustaining water allows them to survive in an otherwise hostile environment.

Accordingly to the Islamic culture, happiness and optimism are represented by the color blue.

While tourists may be visiting this old town for other reasons, it is probably the outstanding color of its walls and the staggered narrow alleyways that keep them coming.

READ RELATED POST  Western Canada Road Trip: Itinerary, What to Do & Where