ROYAL KUMARI OF KATHMANDU – Largely unknown to the outside world, Nepal‘s centuries-old institution of the child deity, the Kumari Devi, is deeply embedded in the culture of Kathmandu Valley. Young, beautiful and decorous, even a glimpse of her is believed to bring good fortune.

The Kumari is the only living goddess worshipped by both Hindus and Buddhists.

The literal meaning of Kumari is Virgin. The Kumaris are young pre-pubescent girls who receive the power of Goddess Kali and Taleju. 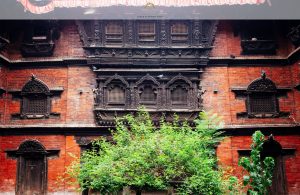 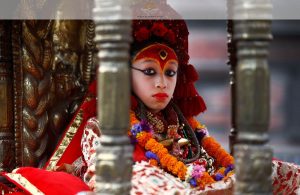 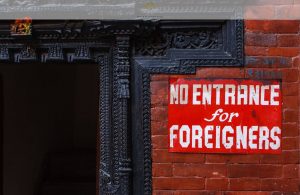 After being selected as a Kumari, a girl’s life changes entirely – ROYAL KUMARI OF KATHMANDU

She will leave her palace only for ceremonial purpose, her family will rarely visit on a formal capacity and her playmates will be from the caretaker’s family. The Kumari always wear red clothes, hair in a topknot and the fire eye painted on her forehead.

The Kumari’s walk in the Durbar Square is the last time her feet will touch the ground until the Goddess Taleju departs from her body. The Prime Minister and President touch the feet of Kumari and seek for a blessing. The Kumari is carried when visiting outside the palace in her golden palanquin.

A Kumari’s glimpse is believed to bring good fortune. Many people visit the courtyard in front of Kumari’s window to get a glance of the living goddess. The more fortunate and better-connected people visit the Kumari in her chambers. She sits upon a gilded iron throne. It is believed that Kumari has special powers over such illness. Bureaucrats and high ranked government officials also visit Kumari Goddess.

During the visit, the actions of the living goddess are closely watched because her actions are interpreted as a prediction of the visitor’s life. Some actions and its meaning of Kumari Goddess are:

The process to find a living goddess is quite vast and has many criteria. Five senior Buddhist Bajracharya, Chief Royal Priest, Priest of Taleju and royal astrologer oversees the selection ritual of Kumari. Some basic characteristics searched in children are sound health, no evidence of scars and marks on the body, uncut and blemish body skin, pre-menstrual and no loss of teeth.

Once a girl passes through the basic requirements of Kumari Goddess, she is then further examined for “Battis Lakshan”, 32-body perfections to decide the future Kumari. Some of the characteristics of Battis Lakshan are:

The children also must not be scared of blood and masked man. Every child is shown several sacrificed buffalo and masked men dancing on top of the blood. If a child shows signs of fear, she is deemed not worthy of Goddess Taleju’s power. The girl that shows courage amidst the blood and dancing is then selected as the next incarnation of Goddess Taleju.

During the 8th day of Dashain, Kala-Ratri, the selection process of Kumari Goddess begins.

HOW IS KUMARI GODDESS DETHRONED? – ROYAL KUMARI OF KATHMANDU

Kumari Goddess is the human symbol of power and protection. Kumari is the sole embodiment of pureness among Hindu and Buddhist followers. A Kumari must be in her pre-pubescent and should not have lost any drop of blood from her body.  After the Kumari enters her adolescence and begins her first menstruation, she is considered impure, and the search of new Kumari starts.

Kumari is selected at very young age from as small to three years. After being selected as Kumari, the children leave their parents and birth house until another living goddess replaces her.

The children live without their parents from such an early age. The parents are proud of giving birth to Goddess Taleju, but also remain sad parting away with their daughter. The parents aren’t allowed to visit their daughter and only see their children when Kumari ventures in special facilities, about 13 times a year.

Kumari lives in the Kumari house (Kumari Ghar), an old palace building without modern facilities. Until recently, the Kumaris weren’t taught education and allowed to use the internet facilities inside the Kumari Ghar. The Kumaris spend their days inside a four-wall room poorly lighted with candles and lamps.

A recent discussion and pressure from Human rights and Children rights activists of Nepal on the Kumari system have somewhat changed the strict governing of Kumaris of Kathmandu. Kumaris weren’t given proper education and knowledge about social life and surrounding. This made the transition from a living goddess to mere mortal after dethroning much more troublesome.

Nowadays, Kumari in the Kumari house is provided with a personal tutor and education. There is even service of the Internet, books, and magazines. The Kumari attends national exams inside the palace under supervision. There is a step towards a better future of Kumari Goddess after they lose the title of living goddess.

There are many Kumari Goddesses in Nepal indigenous to several locations and communities. Patan, Bhaktapur, Kathmandu, Bungamati and other Newar communities have their own Kumaris. The Kumari of Kathmandu is considered as the Royal Kumari, the supreme of all.

Trishna Shakya is the current Kumari of Kathmandu who took over from Matina Shakya on 27 September 2017. Trishna was just three years old when she was declared the new Kumari. She leaves behind her parents and a twin younger brother to embark on the journey of living Goddess.

Dinner with a Geisha: A One-of-a-Kind Japanese Experience